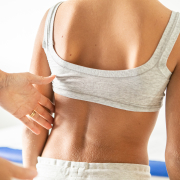 When it comes to scoliosis therapy, aesthetics is one of the goals along with a healthy back.

Aesthetic deformity due to scoliosis and its impact on the patient is considered by the members of SOSORT (International Society On Scoliosis Orthopaedic and Rehabilitation Treatment) as the most important reason for treating AIS; unfortunately, only a few of scoliosis studies were found in PubMed on this topic.

But can a goal, apparently so subjective, be measurable in a repeatable way to become objective? Yes,according to the data collected by the study Reliability, repeatability and comparison to normal of a set of new stereophotogrammetric parameters to detect trunk asymmetries, recently published by the Journal of BIOLOGICAL REGULATORS & Homeostatic Agents.

“Aesthetic impairment is a crucial issue in Adolescent Idiopathic Scoliosis (AIS), but to date no objective measurements are available – states Dr Francesco Negrini, Isico physiatrist – for our research, we used the Formetric®, which we usually use to measure sagittal planes. We have established parameters for evaluating symmetries in patients, such as those of the shoulder blades or hips, to obtain objective data related to the aesthetic aspect. In order to validate this instrument for clinical practice, the first step and aim of this study are to evaluate the repeatability of the parameters measured by surface topography in a group of AIS subjects and to test if they can distinguish healthy subjects from AIS patients to develop an objective tool for deformity evaluation of the trunk in AIS patients. For our evaluations, we used a device for surface topography based on the principles of rasterstereography. This device (Formetric®, Diers Biomedical Solutions) can reconstruct digitally in three dimensions the back of any person”.

The study evaluated 15 selected parameters that could be good predictors of scoliosis’ impact on the patients’ trunk.
“We analysed short-term (30 seconds, 38 subjects) and medium-term (90 minutes, 14 subjects) repeatability of surface topography measures and their diagnostic validity in AIS (74 subjects, 33 AIS patients and 41 healthy subjects) – proceeds Dr Negrini – All examined parameters were highly correlated as far as short, and medium-term repeatability is concerned”.

When it comes to aesthetics we cannot stop at Cobb degrees alone, believing that there is no objective measure: “Symmetries can be measured repetitively, as we did in our study – concludes Dr Negrini – so we can offer an objective measurement of aesthetics in patients with idiopathic scoliosis. The surface topography showed good repeatability. Moreover, some of its parameters are correlated with scoliosis, showing that it could very well evaluate deformity due to this pathology. Thanks to these findings, it will be possible to develop a tool that can objectively evaluate aesthetics in AIS patients.”.

Every year, the Italian Scoliosis Study Group selects the best published papers on conservative spine treatment from the global scientific literature.
Here is the abstract from one of these papers.

Bracing constitutes the mainstay treatment for mild scoliosis. The 3D reconstruction of the spine using low-dose stereoradiographic imaging (LSI) is increasingly being used to determine the true shape of the deformity and to assess the success of bracing.

The aim of the study was to validate the measurement of 3D spinopelvic parameters and vertebral rotation in the setting of bracing treatment via a reliability study conducted in adherence to the guidelines for reporting reliability and agreement studies (GRRAS).

Full spine stereoradiographs of patients with adolescent idiopathic scoliosis (AIS) who underwent Chêneau bracing were retrospectively analyzed. The 3D reconstruction was performed by two experienced operators in a blinded manner and randomized order. Rotation of every vertebra was computed in the coronal, sagittal and axial planes. Sagittal spinopelvic parameters were evaluated. All measurements were statistically compared to determine agreement of the measurement of brace correction using the intraclass correlation coefficient (ICC).

In this study, 45 patients (81% females) aged 12.5 ± 2 years were included. The mean absolute difference was less than 3.5° for all measured angles, less than 4 mm for sagittal vertical axis (SVA) and less than 1.5 mm for lateral pelvic shift. The ICC was high for all parameters (ICC >0.81). Despite the overall high reliability, the reliability of axial rotation was lower in the upper and middle thoracic spine and the lower lumbar spine.

Brace wearing during full spine LSI acquisition does not affect spinal measurements. The LSI under bracing treatment produces reliable measurements of spinopelvic parameters as well as vertebral rotation. These reproducible 3D data enable spine surgeons to assess the true shape of the deformity, to quantify rotation of each vertebra and enhance the understanding of the efficacy of bracing treatment.

Every year, the Italian Scoliosis Study Group selects the best published papers on conservative spine treatment from the global scientific literature.
Here is the abstract from one of these papers.

No study so far has paid attention to strabismus-related spinal imbalance. This study aimed to determine the epidemiology of thoracic scoliosis in children and adolescents with strabismus and investigate the association of two diseases.

A cross-sectional study. Study group consists of 1935 consecutive candidates for strabismus surgery (4-18 years); Control group consists of the age- and sex-matched patients with respiratory diseases. All subjects underwent a screening program based on chest plain radiographs using the Cobb method. Their demographic information, clinical variables and results of Cobb angle were recorded and analyzed.

Our study “Construct validity of the Trunk Aesthetic Clinical Evaluation (TRACE) in young people with idiopathic scoliosis” has recently been published by the journal Annals of Physical and Rehabilitation Medicine.

The aim of this study? Scientifically validate the criteria of evaluation of aesthetics in scoliosis.

Indeed, we recall that aesthetics is recognized as a main outcome in idiopathic scoliosis (IS) treatment, but to date, there are no standard criteria for physicians’ evaluation.

Trunk Aesthetic Clinical Evaluation (TRACE) is a simple 12-point ordinal scale to quantify symmetry as a proxy of aesthetics. TRACE is already diffused worldwide and has been used in clinical research.

” In our study, that included 1553 participants (1334 females, mean age 13 years old), we aimed to validate TRACE and improve it with Rasch analysis – explains prof. Stefano Negrini, Scientific Director of Isico – the statistical technique allows to make more precise measurements.
Let’s take the temperature measurement as an example: is it hot, warm, medium, or a little cold? With this type of analysis we develop a real thermometer, obtaining a numerical data. The same criterion is applied to the measurement of the aesthetics, reliably and effectively, as well as objective because it derives from external observation and not simply from what the patient reports “.

The TRACE ordinal scale has been converted into a Rasch-consistent, interval-level measure of trunk aesthetics in IS patients and can be used to compare different populations.

“TRACE can be used as an outcome measure and in everyday clinical evaluation of IS, even if new developments of the scale are advised – ends prof. Negrini – It is an objective tool, the only one up to now in the literature. The benchmark for the aesthetics in scoliosis which we want to improve more and more with use”