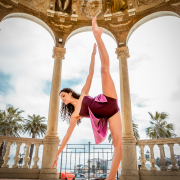 Alessia has dancing in her heart. For years she has been treated with a back brace and exercises due to a challenging scoliotic curve and her path has always been a struggling uphill ride, during which she never lost sight of her passion, dancing!
She never stopped dancing, even wearing her corset and never gave up until recently she won the title of 5th Italian champion in the category of Modern/Contemporary dance at the 2022 Italian championships. Here are the words she wanted to share.
“My name is Alessia Mancini, and I am a dancer. At the age of 6, I was diagnosed with very important scoliosis: my curve was greater than 40 °. At the age of 11, I came to Isico, where I made my first visit with Dr Sabrina Donzelli, who followed me for the duration of my therapeutic path. After a few months, I was wearing the first corset of a long series. For two long years, it accompanied me for 23 hours a day; I wore it when sleeping, going to school and playing sports. The only hour of freedom available was dedicated to dancing.
Over the years, the wearing hours have decreased to 18 in the last six months of therapy: I was now 18 years old.
Therapy has accompanied me through the most complicated and changing years of my life, forcing me to sacrifice aspects of adolescence that were taken for granted by my peers.
All this without ever compromising the one thing I already understood, when I was only 11 years old, was essential for me: dancing. Although I could have felt inferior to my pathological condition, I always thought, on the contrary, that I had something more and that I was somehow special.
I had to work on many technical things subjectively compared to my fellow dancers since my body’s levers and balances are shifted compared to an “aligned” person! But now I thank the little girl that was me, who has always believed in this dream because thanks to her that I am today’s Alexia; she pushed me to get to where I am right now.
Finally, I would like to thank my doctor again, Sabrina Donzelli: she was and will be my doctor of life!”

Is there any particular sport, rather than others, that individuals with scoliosis should choose?

Two Isico studies have addressed this question, and in so doing they have dispelled the misconception that dance and swimming have a negative impact on scoliosis curves.

The studies in question will be presented in Melbourne, Australia, at the next SOSORT meeting, this year being held from April 27th to May 1st, 2020, during Spine Week.
As their titles show, these studies — Is swimming helpful or harmful in adolescents with idiopathic scoliosis? and The effect of dance on idiopathic scoliosis progression in adolescents — explore the relationship between scoliosis and two types of physical activity: swimming and dance.

A few years ago, a previous Isico study, Swimming and spinal deformities: a cross-sectional study, exploded another myth.
It showed that swimming has no therapeutic benefit; in fact, the swimmers presented greater asymmetry and hyperkyphosis than the individuals who did not swim.
On this basis, it was concluded that swimming has a negative impact on posture and consequently is not an effective form of prevention.

The aim of our latest study on swimming was to verify the safety of recreational versus competitive swimming in adolescents with idiopathic scoliosis.

“Compared with our 2013 study, in this latest research we did not consider healthy subjects” says Alessandra Negrini, Isico physiotherapist.
“We studied a sample of subjects with mild scoliosis (10-25°, mean Cobb angle 16°), not being treated with braces, and therefore only a clinical population. Our aim was to evaluate, on the basis of radiological findings at 12 months, the effect of swimming in individuals who already have a diagnosis of scoliosis and are going through a growth spurt (Risser-0-2, over 10 years of age). The effect of swimming was found to be comparable to that of other sports, and it was also similar in the competitive and the non-competitive swimmers. Age and hump size were the only factors found to influence the risk of worsening. These findings show that there is no reason to demonise swimming, be it recreational or competitive”.
In other words, they show that swimming is no better or worse than other sports.

Many spine specialists advise their idiopathic scoliosis (IS) patients to stop dancing on account of the risks (increased spinal mobility and flat back) that are potentially associated with the movements typically involved in this form of physical activity.
“The current literature reports a higher prevalence of scoliosis in subjects who practice dance than in their peers who do not dance” says Michele Romano, director of physiotherapy at Isico. ”In this research, we set out to assess the impact, in terms of the progression of idiopathic scoliosis, of dance compared with other sports in a group of adolescents (545 consecutive scoliosis patients)”.

The patients were divided into two groups: a Sport Activity group (SA – 461 participants), whose members performed any kind of sport, and a group of dancers, the Dance Activity group (DA – 84 patients).

“According to the results, the dancers showed a similar risk of progression as the patients performing other types of sport” Romano concluded. “The small sample size is one limit of the study; larger studies are needed in order to verify the effect of practising dance”.

Scoliosis: there is no particular sport that is more recommended than others

So, what conclusions can be drawn from the two studies? According to the two Isico specialists, at present there is no evidence to suggest that any particular sport should be preferred over others, or that there is any sport that people with scoliosis should avoid.
Given that neither swimming nor dance, two of the activities most often discouraged for those affected by scoliosis, showed negative effects when compared with other sports, it seems unlikely that other types of sport might have a negative impact.
“The scientific evidence tells us that sport is good for us, and while it may not constitute a treatment as such (unlike specific exercises), it may have a positive effect, supporting the improvements recorded by those with scoliosis” says Alessandra Negrini, “as already shown by my study Effect of sport activity added to full-time bracing in 785 Risser 0-2 adolescents with high degree idiopathic scoliosis (which won the Sosort Award 2019). We at Isico have always believed that it is crucial for our patients to carry on doing sport, especially since their treatment can already be an uphill battle for them. In short, being able to carry on doing sport, something many of these youngsters are passionate about, can make it easier for them to accept the treatment.»